For those of you for whom the reference is lost on Cilla Black presented a television programme in 1980s called Surprise Surpirse.  This is the story of unexpected wins. 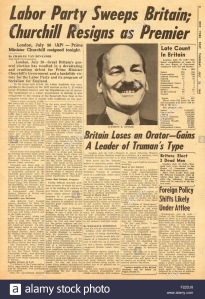 Whilst no armistice had yet been signed and the dust had barely settled on VE Day, an Election was called for July 5th.  The last election was held 10 years previous and when George VI dissolved parliament the country was hungry for a say.  This said turnout that year was was only 72%.  It is fair to say that when the votes were finally counted almost 2 weeks later no one was expecting an Atleee victory let alone the scale of Churchill’s defeat.

There were some signs: The public booing Churchill received at walthemstow dog track, the discontent the squaddies personally felt for Churchill and the concern for jobs when they came home.  The biggest issue was almost certainly the Labour manifesto promise to implement the reforms proposed by the Beaveridge report.

In this election the so-called mouse laid waste to the bulldog with the biggest national swing in any general election. 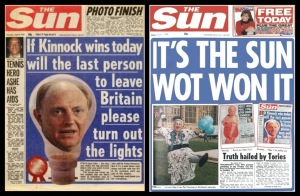 John Major had been in the job for almost 18 months when he called for a general election in terminal year of the parliament.       Kinnock had made significant changes to the perceived electability of the party and this combined with the length of time the Conservatives had been in power, all polls pointed to a hung parliament or slim Labour majority.  When the result was announced in Basildon the concept of the Quiet Tory was vindicated.